On 6 February 2016 at least 7,000 hospital doctors assembled in London and marched to Downing Street. 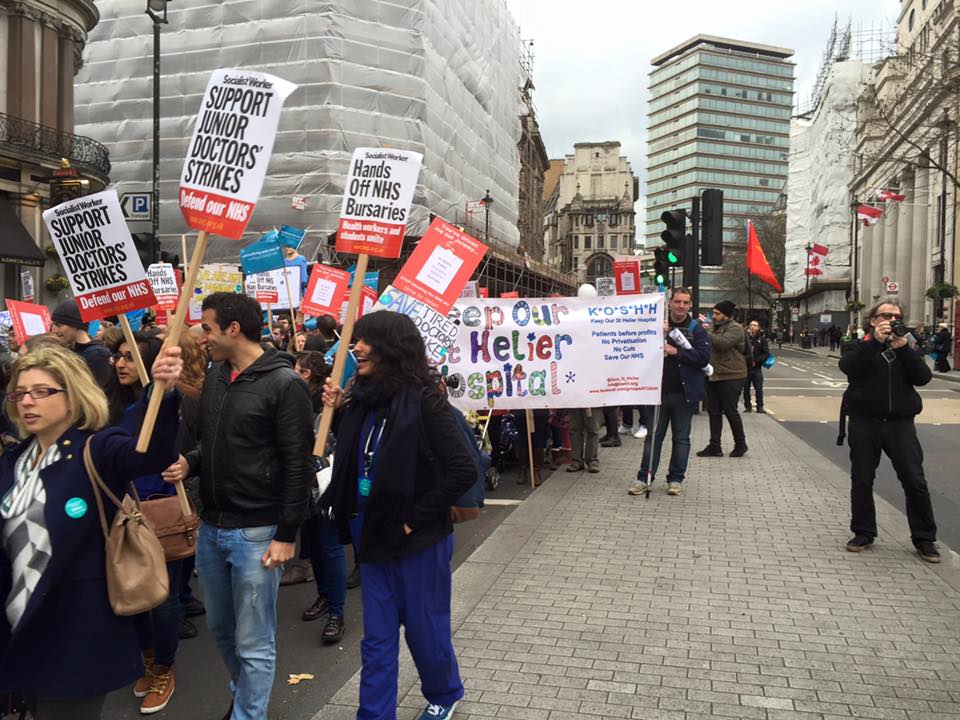 BBC News did, albeit briefly, report upon the event, but for some reason, the footage shown was shot after the protester's very dignified "silent protest" at the end of the march, by which point, only a few stewards remained.

Doctors sit in silent protest at the end of Downing Street

The stewards could be seen in shot behind the reporter, collecting up their placards by the gates to Downing Street. With this misleading picture, the reporter then said that “up to 1000 junior doctors” had marched – a deliberate understatement and a blatant untruth. Some estimate around 10,000 people attended, but there were at least 7,000 people present.

There may well have been complaints to the BBC about this “coverage”, because the BBC London News that evening ran a different package lasting only 20 seconds. It showed some very brief footage of the march. The commentary described it as a “protest about pay and conditions” and gave only the Government’s side of the story. It did not mention the key points that the proposed contract would:

Moreover, even the current treatment of staff is causing committed trained doctors to go abroad for a fairer and safer working environment.

The BBC London Evening News did contain a story about a new "Government" plan to build a centre for treating Female Genital Mutilation (FGM) in "West London", but again, they completely failed to mention that St George's hospital is in the process of losing their urogynecology department, which is itself an FGM specialist centre - a protest about this took place on the same day - you can see a clip from the protest below:

The BBC have form for censorship by omission

Back in 2013 the BBC’s tactic was to ignore NHS protests altogether. On the 29th of September that year, the Manchester police estimated that at least 50,000 NHS campaigners had marched. The march went past the Tory Party Conference venue.

Nothing about this major protest was broadcast until the BBC became aware of reports on social media, following a tweet by their political reporter Norman Smith. Norman was reporting on the Conservative Party Conference. He said that “security” had told him he was not allowed to film the march.

Two people managed to get on BBC’s Newswatch programme to complain about the lack of coverage of what the police had described as the biggest march that Manchester had ever seen. The BBC editorial staff were presumably aware of the danger of having to respond to unexpected questions, especially as they were so vulnerable, that they refused to provide anyone to answer the complaints. Here is the relevant part of that programme:

The BBC’s Charter requires it, impartially and independently to educate, entertain and inform. In 2013, for apparently questionable reasons, the BBC appears to have chosen not to "inform".

They appeared to have decided yesterday, as has more recently become the norm, to only tell one side of the story. For example, they clearly chose footage showing the least possible number of doctors picketing on the day of the first doctors’ strike for 40 years (12th January 2016). There will have been many hospitals with many more doctors to be seen on strike than the ones they chose to show, as there were for example outside St Helier.

There is no point in complaining to OFCOM, though. They are the official body to deal with complaints about every broadcaster except the BBC. The BBC Trust is the Corporation’s own and only judge and jury. You can submit a complaint by clicking the following link: