It is a common accusation when you are campaigning to save your local hospital and, indeed, the wider NHS. The “scaremongering” accusation is often used to either try and shut a discussion down or as a way of sticking fingers in ears and burying heads in the sand. After all, nobody wants to believe that their local hospital or the NHS as a whole is under threat.

“I went to the hospital the other day and it was fine. The hospital is not going anywhere. Stop scaremongering!”

We don’t doubt for a moment that you were fortunate enough to have a hospital to go to, and when you got there, you were treated well by professional, hardworking staff. But those staff are working under a cloud of uncertainty, particularly nurses, junior doctors and anyone on a bursary, and one day, they may not be there to treat you or your loved ones when you are sick or injured.

“Here we go again! Another NHS campaign group saying we only have a matter of weeks or day to save the NHS but the NHS is still here. Change the record and stop scaremongering!”

Death of a thousand cuts

Do you really think for a moment that any government of any stripe would simply shut down the NHS in one fell swoop? Of course not. That would be political suicide. But that does not mean that the NHS is not being chipped away at, little by little, dying the death of a thousand cuts. Suddenly, your local Clinical Commissioning Group has no money for a service it used to provide, or a vital service is under threat. 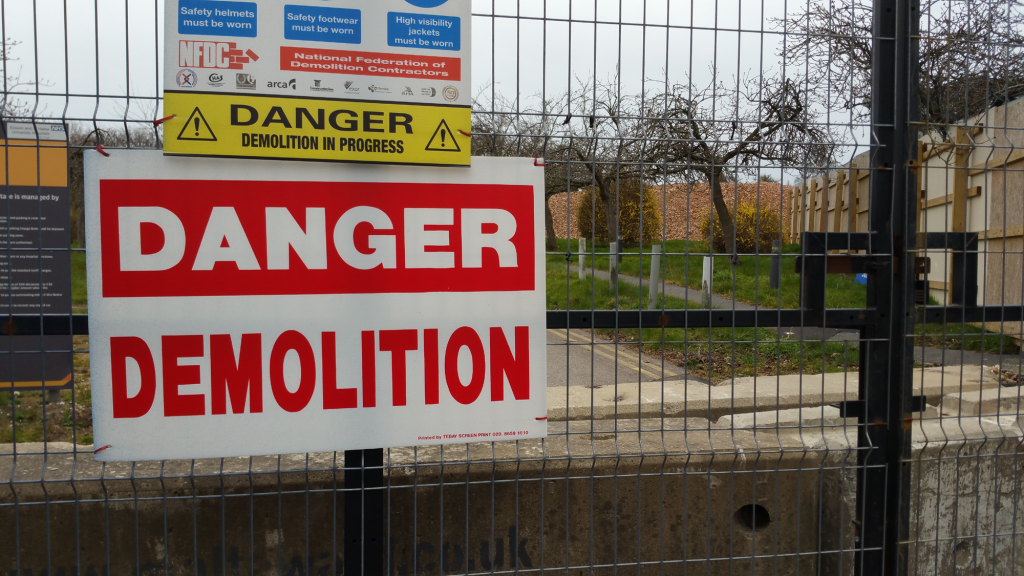 The main entrance to Sutton Hospital, and a pile of rubble. Which hospital might be next?

Perhaps services have been farmed out to the private sector and if something goes wrong, you are forced to get answers from a private company that is exempt from freedom of information laws and not subject to the same transparency as a government entity. For that private company, corporate confidentiality trumps public accountability.

Or perhaps junior doctors will have a contract that is unsafe and unfair imposed on them and, as a result, they will leave the NHS in droves, seeking work in countries where they are treated with respect and where they can do their work while well-rested. This, in turn, leads to a decline in the NHS and then it is ripe for full privatisation, with the blessing of a public that has been duped.

These things are already happening.

Of course campaign groups, such as KOSHH, are going to raise awareness by saying that there is limited time to save Epsom and St Helier hospitals as well as the wider NHS. Sometimes the truth is unsettling, but letting people know the truth is part of the job of campaign groups.

KOSHH has never scaremongered. We have merely raised awareness about what is going on, and letting people know that Epsom, St Helier and Queen Mary's Hospitals are not safe. We have been saying this all along.

Here are a few examples: