Massive Loss of Epsom Hospital for an Ever Shrinking Gain.
A betrayal of the public interest.

On Friday 15th March 2019 it was announced at a Public Briefing that the Epsom and St Helier University Hospitals Trust (ESTH) had sold one fifth of Epsom Hospital’s land and buildings.

This huge section of much needed major acute general hospital land and buildings were sold for a mere £18.5 million. It was sold to Legal and General (L&G). This despite there having been an offer by another developer of “almost £40m”. Daniel Elkeles, ESTH’s Chief Executive, stated that L&G intend to build luxury “McCarthy and Stone“ type retirement accommodation for the over 55s - or as L&G cynically call them “Last time buyers”
See Link here: The Telegraph, Business, 9th May 2019

In August 2018 Mr Elkeles announced that "some of the site to be sold would be given over to the provision of a social care facility and affordable housing for key NHS workers, such as junior doctors and nurses working at Epsom General Hospital" (as reported by the Epsom & Ewell Group of Residents Associations).

Public feeling about the land sale expressed at the Trust's Public Meeting back in August 2018 (and elsewhere) was clear and emphatic. The public demanded that the land either not be sold at all, or, if the sale did go ahead, the land should be used only for much needed social care, affordable housing or staff accommodation.

Epsom council had demanded that any land sold should be used for Social Care, but this was ignored by the Trust.

The Trust has accepted a deal that meets none of these requirements. 20% of much needed major acute hospital land and buildings has been sold at a knock-down price for private profit.

This sale of NHS land is a betrayal of the public interest. Especially when it goes for a knock down price.

Mr Elkeles revealed at the Trust’s 19 March 2019 Briefing that, far from £18.5m, after costs the sale would yield only £15m for the Trust. He and the board gave no satisfactory explanation for this huge reduction in profits.

Under pressure the Board admitted that no contractual requirement at all as to the future use of the land had been placed on L&G as a condition of the sale. This was met with widespread disbelief and some anger among members of the public and Councillors present.

As recently as 4 July 2019 the local Guardian’s “Debate Guardian” page included a letter by Mr Elkeles. He claimed that the recent sale of “surplus land” on the site of Epsom Hospital was a “positive opportunity” to “use the land we own more efficiently” and save “money on maintaining … disused and derelict buildings”; that it is “land we do not need now and will not need in the future”; and “it has unlocked in excess of £15 million of investment.”.
Only 8 days later, at the Trusts Annual Public Meeting on 12th July, Board papers revealed that the Trust now claim that they only made a profit of under £12.4m and that included about £1m for more land sold at the Sutton Hospital Site. 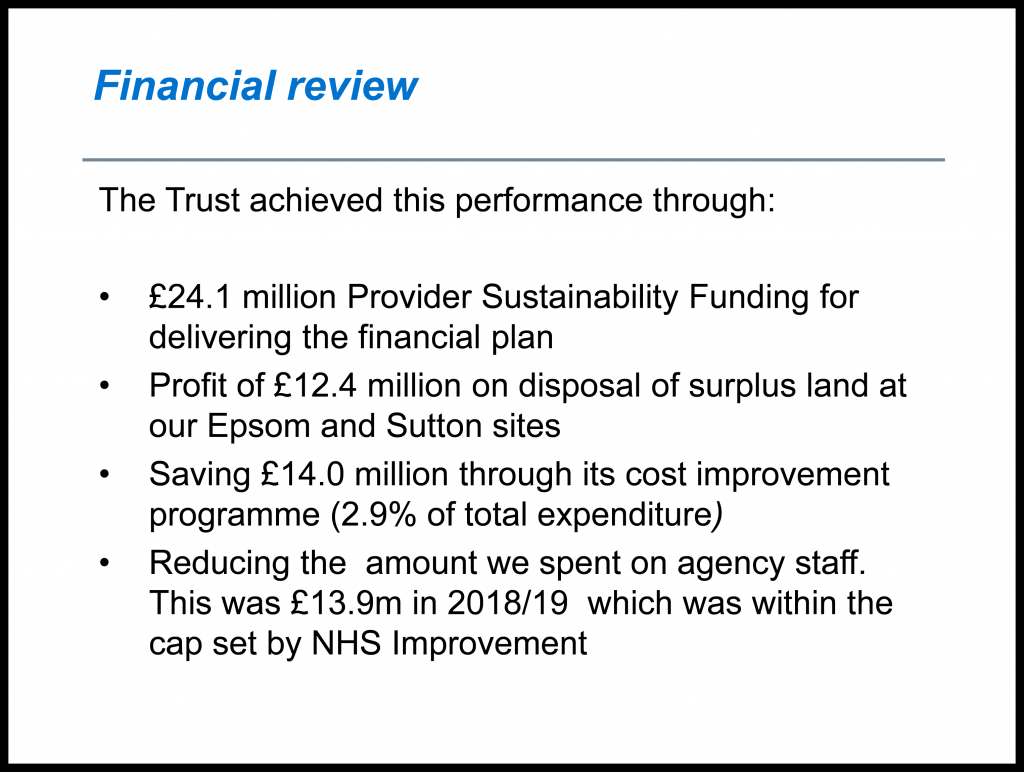 The description of the land and buildings as “surplus”, “disused” and “derelict” deserves challenge. There is evidence in a Trust paper that, at the time the sale was being proposed, the land and buildings concerned provided accommodation for doctors, nurses and support staff, therapies (including Physio, Speech, Cardio etc), car parking and the hospital boiler system. Resident staff were issued with notices to quit their accommodation and costs of re-providing for them and the displaced services have been incurred. Furthermore, the original buildings are solid brick-built and, apart from lack of maintenance to window frames, are not visibly derelict.

Replacement buildings that have been erected are of far less durable construction, consisting of prefabricated units clad in plywood and faced with fake brickwork.

At the time that the two hospitals were established, every square inch of land was purchased expecting to be needed for the then, much smaller population. There was also hospital care available at Sutton Hospital and the Wilson Hospital, and the Nelson hospitals, and the then separate, Queen Mary’s Hospital for Children in Carshalton.

KOSHH has so far been able to identify costs to re provide facilities lost in the sale, amounting to £12.5m with much more to come. It is therefore clear that the public – the ultimate owners of the land and buildings that have been sold – have been deprived of 20% of the opportunity to provide adequate NHS acute general hospital capacity at Epsom hospital for less than zero benefit (see notes below).

Acute services in SW London, such as A&E, Maternity, Intensive Care, Cancer Care, Ambulance wait times and planned procedures are all struggling to meet NHS targets now. Bed occupancy rates are routinely 10% higher than the highest safe level (85%) required to limit hospital acquired infections. Demand for these services and for acute beds has increased dramatically and unexpectedly this year.

Given the fact that the local population is set to rise by about 25% over the next 15 years and we are often told that we have an ageing population with more life long conditions how can it be asserted that we will NEVER need more land or capacity. The Royal College of Emergency Medicine has often said that we need more beds not fewer, and has pointed out that we have the worst ratio of hospital beds per 1000 of population in the developed world:

In SW London we have approximately 2 beds per 1000 people. The "Improving Healthcare Together 2020-2030" proposals would reduce that figure even further, possibly down to 1 bed per 1000 people, with potentially 50% of them private.

We have to wonder why this very odd decision was made, and whose interests are served by this choice.

It is certainly not in the public interest, and the only conclusion we are able to draw, is that this represents the continuation of the "scorched earth" policy, which is currently being used in an attempt to degrade our NHS and put it beyond future repair.

KOSHH feel that the sale of publicly owned, NHS land and buildings is, at best, a short sighted measure to meet financial concerns and will leave the NHS with too little room for expansion to meet current and future needs. At worst, it is part of the plan to run down the NHS as a prelude to its final privatisation.