The local Guardian have run a story on the #JuniorDoctors strike planned to take place on the 2nd of December.

KOSHH have already stated their support for the #JuniorDoctors in their proposed industrial action (see here).

The article contains a quote from Health Secretary, Jeremy Hunt as follows: 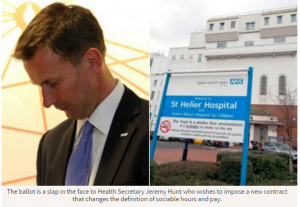 "It is regrettable that junior doctors have voted for industrial action which will put patients at risk and see operations cancelled or delayed. We want to ensure that patients have the same quality of care across the week, and have put forward a generous offer that increases basic pay by 11 per cent and reduces doctors’ hours. We hope that junior doctors will consider the impact this action - especially the withdrawal of emergency care - will have on patients and reconsider."

In response to the statement from Mr Hunt, KOSHH campaigner Dave Ash said:

"I agree that today's announcement from Junior Doctors is regrettable, and I believe that Jeremy Hunt should hang his head in shame, for it is his actions which have led to this.

It is Jeremy Hunt's intention to deliver the Government's unrealistic election pledge for a "7-Day NHS" while simultaneously attempting to force £22bn of efficiency savings in the NHS by 2020.

The BMA and Junior Doctors have taken every reasonable step to avoid this situation, and in the interests of ensuring patient safety, they have given ample notice of the planned industrial action.

Doctors, by definition are people with sharp, analytical minds, so it comes as little surprise to me that they have seen through the spin which Jeremy Hunt and the Conservative Government has fed to them.

Junior doctors have given a clear message to the government and have the full support of their profession. The decision to strike should be seen as a referendum on this government and the previous Coalition government's appalling stewardship of the NHS.

Hopefully this action will throw a spotlight onto what is going on under this government's policies.

The Cities and Local Government Bill currently in committee stage in the Commons is the next bombshell to be thrown at the NHS.

We are worried by how few people seem to be picking up on its significance. As someone who is not a Doctor, I wholeheartedly support the Junior Doctors in this action."

You can read the full article here